KARACHI: In clear violation of government instructions, University of Karachi has been doing business through private banks instead of Sindh Bank, the practice has inflicted financial harm on the provincial government and institutions, MM News has unearthed investigation.

Contrary to government orders, the University of Karachi had withdrawn the 320 million rupees received in June from the savings account of Sindh Bank and transferred them to the current accounts of three private banks on behalf of use. Rs.220 million was placed in United Bank, Rs.100 million in National Bank and Rs.50 million in Habib Bank Limited.

It is pertinent to mention here that after the arrival of the current administration, private banks were used for the collection of fees for higher education programs such as M.Phil and Ph.D. The administration of the University used UBL instead of Sindh Bank for fee collection.

On March 29, Sindh Bank CEO Imran Samad and his officers met with the Acting Vice Chancellor and his administration to sort out these issues. However, the problems persist.

A letter was sent on September 26, 2019 by the Universities and Boards of Trustees to the Vice Chancellor, in which it was said that all funds from private banks would be immediately transferred to the University Sindh Bank Karachi branch and that all transactions would be carried out by Bank of Sindh.

“Any type of grant including single line transfer, aid and budget allocation shall be kept only in Sindh Bank,” a statement issued by the Administrative Secretary of the Master Account informing the Administrator of the University of Sindh Cabinet’s decision on this. 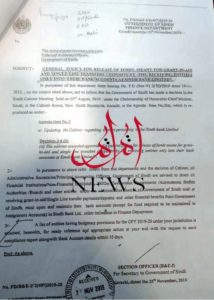 The private banking favor process at the University of Karachi is still ongoing. In light of the 2020 decision by the University of Karachi Syndicate, the old agreements signed with UBL, National Bank and HBL were to be terminated and new agreements were to be negotiated. Chief Financial Officer Tariq Kaleem instructed all banks to sign new deals. However, the current administration ignored the instructions and still collects semester, admission and other fees through private banks.

University of Karachi faculty funds have also been disbursed to private banks. Rs. 100 million provident funds have been placed for 8 years in UBL, which became mature in June 2021. UBL brought the university a profit of 9.5%.

On May 12, 2016, UBL’s Director of Operations wrote a letter to the Director of Finance of University of Karachi and offered 14.89% for keeping the provident fund in the bank for 8 years, and 17, 39% for 100 million rupees. However, only 9.5% of profits had been paid out by June 2021. Chief Financial Officer Tariq Kaleem took no action against the bank after a full year had passed.

Musharraf, the database administrator in charge of the CFO, was also no slouch in rewarding United Bank Limited. The Fee Tracking Cell instructed departments to charge manual fees rather than online, for which vouchers are issued. The manual fees are collected in the same private bank while the fees are collected from the current account of this bank. 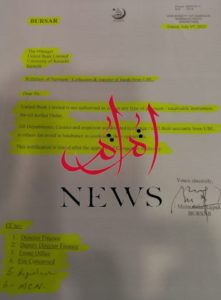 It should be noted that the operations manager and junior employees of private banks receive commissions and bonuses from the head office for bringing maximum business to current accounts compared to savings accounts. Hence, the University of Karachi with 40,000 customers is considered a cash cow for these banks. 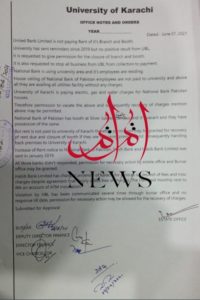 Documentary evidence in this regard has been sent to relevant NAB officials, including the FIA ​​Banking Circle, for inquiry and investigation, according to Messrs. 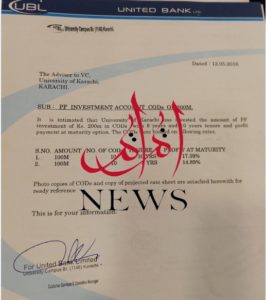 In this regard, Acting Registrar Dr. Maqsood Ansari when contacted said that the number of banks used to collect tuition fees is not so high as students should be able to deposit fees at any bank near them. He added that most of the funds of the university are deposited in National Bank and Sindh Bank and are available for salaries. However, further details can be obtained from the Director of Finance. Finance Director Tariq Kaleem did not receive the call when contacted. The views of the CFO and relevant banks will be published as they become available.