COAL GROVE — Steve Easterling seems to be picking up a lot to do over the past few years.

One of his favorite things now is reading.

“I have learned a lot to read now. I’m really into Stephen King,” Easterling said. 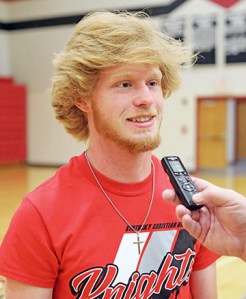 Steve Easterling of The Hornets

Another thing the eldest Coal Grove Hornets learned is the race track. And that’s another good habit because it led to him signing a letter of intent with the Kentucky Christian University Knights on Tuesday.

Athletics is among the sports he has practiced, including football, basketball, and weightlifting. Easterling actually seemed to lean towards football as his favourite, but he admitted that track grew on him.

In fact, Easterling didn’t start racing on the track until his freshman year, and he was initially reluctant to continue with the sport.

“I had no intention of racing on the track. It was one of those things I got drafted into,” Easterling said. “They said, ‘Hey, come with us today’ and it was December. I never gave up. I just stayed.

“At first I thought, ‘This kind of sucks. Why am I racing just to race? But then I really liked the competition aspect and you’re racing with people you grew up with. I really like being able to compete two days a week rather than like a football game every Friday when you practice all week, it’s just a lot more fun.

Jay Lucas is both the Hornets’ football coach and track and field coach, and he has a good idea of ​​the type of person and player the Knights will add to their program.

“Stevie is a wonderful worker. With Stevie, you get a kid with a great character, a great work ethic, and a fantastic kid who always pushes himself to be the best he can be,” Lucas said.

“He has been a huge asset to us over the past four years. He really helped us kickstart the program and put it back in the right direction.

Easterling said he was deciding between KCU and Morehead State, but he admitted the Knights were really the starting line favorites at the finish.

“I was watching Morehead State but that was sort of my backup. KCU first offered me a scholarship and that’s where I decided to go,” Easterling said.

Kentucky Christian is expected to watch Easterling in his main events of the 400 meters, 4×400 relay, 800 meters and possibly hurdles.

Easterling said looking at the KCU roster and his era, he thinks he can compete as a rookie.

“I’ve looked at the times and I think I can race with them right now. Hopefully when I get there I’ll be better. I think I’ll have an impact in my first year there. “, did he declare.

The improvement will be enhanced by the fact that Easterling can devote all his sporting time to the track and not share it with football.

“I think I will improve because it will be more work on technique than just fitness. With track (in high school), that often gets put on the back burner because you’re more conditioned for football and basketball or whatever sport you play. Anytime I get the chance to focus on the whole year rather than muddying the waters in three months, it gives me the chance to do a lot of excises and different stuff,” Easterling said.

Although he talked a lot about football, Easterling said there were a lot of differences between the two sports and they both had their merits. However, Easterling said he was more suited to the track.

Although Coach Lucas was a big influence, Easterling said his parents Mary and Steve – he’s the superintendent of Dawson-Bryant Schools – had the biggest impact on his life.

“Dad was definitely a huge influence, more in the sporting and academic aspect, but how to be a man,” Easterling said. “But my mum also played a big role in making me work on my times tables when I was very little and reading even though I hated it. When I look back I’m glad they did. do.

Easterling plans to major in business.